Editors' Picks: 19 of the Best Things to Do in Oregon! 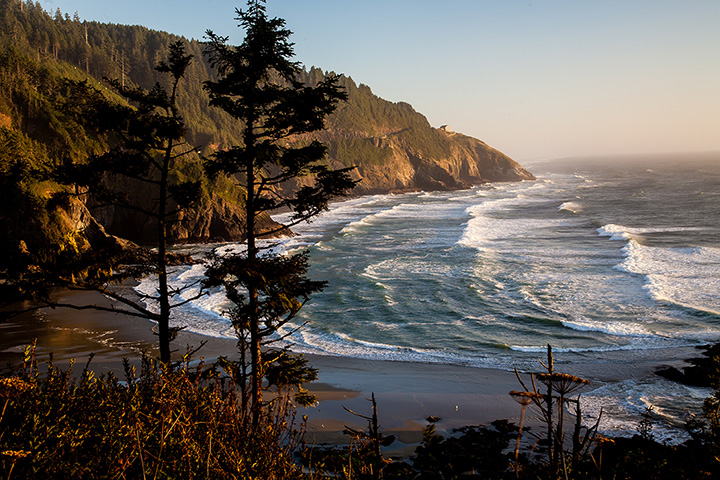 Oregon is home to the country's deepest lake (Crater Lake) and shortest river (Lincoln City's "D River" - 121 feet long). It's where the world's largest cheese factory resides (in Tillamook), as well as the country's largest population of ghost towns (more than 60). Yup, Oregon is pretty weird and wonderful - no wonder Matt Groening set his quirky series, "The Simpsons," in Springfield, OR.

So "don't have a cow, man" - get to exploring this wonderfully diverse state. Here are 19 cool places to start.

There are over 1.5 million acres of this gorgeous forest, butting up against the Cascade Mountains. It's perfect for hiking or just taking in some spectacular scenery, including rivers and volcanoes. (Blue River)

Nothing says "springtime" quite like a carpet of wildflowers in bloom. McCall Nature Preserve is one of the best places in the state to take a pretty hike. (Rowena)

Do Some Whale Watching

Catch gray whales during their annual spring migration. It's one of the most amazing sights in nature.

You'll be surrounded by literally hundreds of beautiful, fragrant blooms. There are 500 different varieties in this public garden that was first established in 1917. (Portland)

At nearly 2,000 feet, it's the deepest lake in America - and one of the most beautiful. The water is so blue and the setting so pristine, it's guaranteed to take your breath away.

Who doesn't love these adorable little guys? The Sea Lion Caves are a big hangout for them, where you can watch them interact with each other in a stunning wild setting. (Florence)

Every July, 80 different craft breweries from different parts of the country set up shop in what fans call "Beervana." It's one of the longest-running craft beer festivals, attracting upwards of 80,000 enthusiasts. (Portland)

Back in 1906, the "Peter Iredale" ran aground on the Oregon coast. It was impossible to remove, so the wreckage has just sat there for over a century. During low tide, you can walk up to it and touch it. (Warrenton)

This crazy natural rock formation creates some of the wildest wave watching on the Oregon coast. Prepare to be amazed by the power of Mother Nature. (Otter Rock)

Mount Hood is the highest mountain in Oregon, and the Scenic Loop lets you drink in all of its beauty in one go. There are waterfals, alpine forests and breathtaking views around every bend.

These stunning formations are made even moreso by the dazzling colors that are ingrained into them. You'll think you're on another planet. (Kimberly)

Ever since it opened in 1930, the naturally-occurring optical illusions of this roadside attraction have dazzled visitors: compasses act crazy, things seem to defy gravity. There's something weird about the energy of the land or something. (Gold Hill)

This lovely park is noted for its historic value (it opened in 1892, and helped redefine what public parks would be in our country), but also for its serenity. Beautiful trails wind through established trees, fountains and ponds. (Ashland)

It's one of the most popular destinations for winter sports. There are over 3,000 vertical feet of groomed slopes for skiing, and an awesome park for snowboarders.

Spend an afternoon exploring its wonderful collection of mint-condition planes - including the historic "Spruce Goose" built entirely out of wood. (McMinville)

It's been called "Oregon's Iditarod," with teams racing in both 100 and 200-mile events through the rugged Wallowa Mountains. And fans can "meet the mushers" ahead of the race. (Joseph)

Do Some Winter Storm Watching

The Oregon coastline gets pretty dramatic during the winter months, as the strong winds whip up the surf. Bundle up and watch the show.

Explore One of the Top Antiquing Towns

The small town of Aurora, just outside of Portland, is known as one of the best places in America for antique-shopping. You never know what treasures you might turn up.